You know I love my mascaras, so during a recent trip to my local Bluemercury, I was perusing the counters and came across a brand called lune+aster. While this line isn’t touted as ‘clean beauty’ per say, it is listed with a few labels that caught my eye like being paraben and phthalate free as well as no animal testing and gluten free/vegan. I played with some testers and liked the products so out of curiosity I decided to look up the ingredients to further investigate.

While in the store, I pulled up the website and only the key ingredients are listed, which bummed me out. I want the full list, not just the highlight reel. Not all consumers may care, but this one does! I asked the sales person for the products, and thankfully the ingredients are listed on the packaging. After a quick scan of the ingredients in the products I wanted, I deemed them as clean enough to purchase as nothing jumped out at me specifically as harmful off the top of my head. I would love to see their ingredients listed online because most of the time I research products pretty extensively before purchasing.

I got both the Prep Star Lash Primer and the Stratosphere Volumizing Mascara. 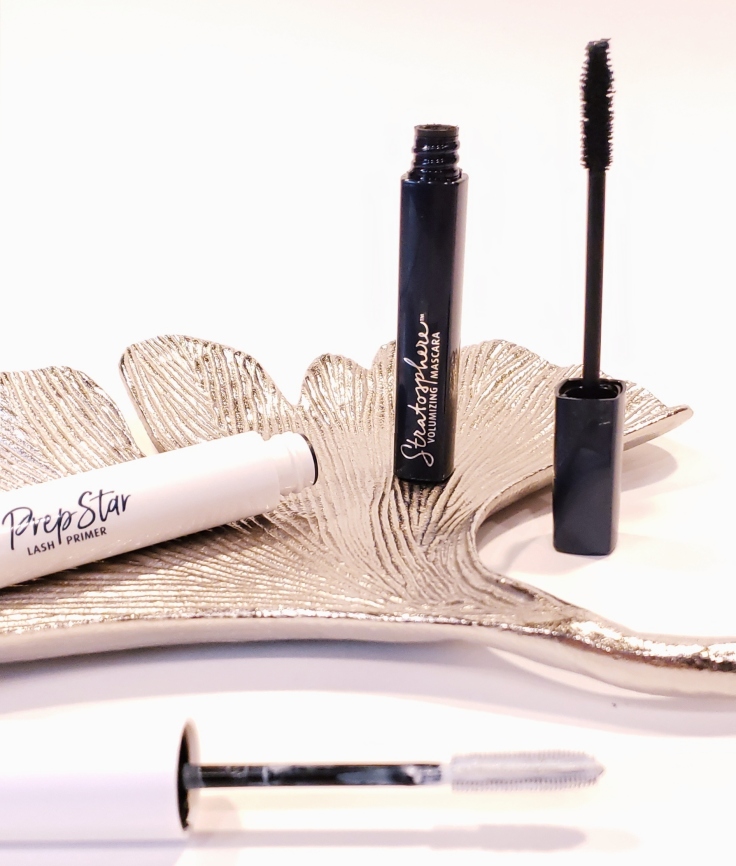 Prep Star is a classic white mascara primer designed to beef up your lashes before applying your mascara. Typically mascara primers also prolong your wear time, and my hope was that this one would prevent smudging (hello, queen of the pandas, nice to meet you). It has a plastic comb style brush which I like. To my surprise, this formula is a little wetter than I expected, but it goes on nicely thanks to the comb. Because it is a wetter formula, it stays wet for a while after applying. Interestingly though, I actually like this in terms of a primer as it sort of bonds into whatever mascara you apply over top of it.

The Stratosphere mascara is a volumizing formula. Normally, I prefer lengthening formulas. I also prefer plastic applicators over the traditional brush style; but something about this wand called out to me. It reminds me a little bit of the Tarte Lights, Camera, Lashes brush, just a little bushier. Also, I preferred the ingredients of the volumizing mascara to the lengthening one (it contained sodium laurel sulfate which I’d prefer not to use). I absolutely love this mascara formula. It’s creamy right out of the gate meaning it isn’t so wet that it’s thin or takes too long to dry, nor is it dry and flaky. It’s like Goldilocks in terms of formula: juussstttttt right. This really fans out my lashes and makes them look full and pretty. It also adds some length beyond what the primer alone adds. Overall, this mascara is solid and I would recommend it in terms of results.

I really like both products. I do get the tiniest bit of smudging by the end of the day and the occasional flake, but it’s nothing severe enough that I find myself avoiding wearing them. I really love how fluttery and full these make my lashes, too. Using Prep Star before Stratosphere really does make a difference in terms of how big it makes my lashes. Stratosphere does add volume and separation on it’s own, but Prep Star really enhances the length and overall density.  Using Stratosphere without Prep Star, I don’t find there is much of a difference in terms of smudging.

While these mascaras aren’t necessarily the cleanest, they certainly aren’t horrible either. I would compare them similarly to the Honest Mascara or Glossier Lash Slick. I tend to be more lenient on mascaras because they aren’t applied directly to the skin and what contact they do have with the skin is usually pretty limited – just my personal take. If you’re looking for something extremely natural, this mascara probably isn’t for you. I recommend Rejuva Minerals, Root Pretty, or Gia Minerals.

Digging a little deeper into ingredients lune+aster uses in some of their other products,  oxybenzone is used as an SPF in their CC Cream which I’m not keen on. Oxybenzone is studied to cause cellular changes and ironically is considered photosensitive, meaning reactive to sunlight. It is an ingredient that can also enhance the penetration of other ingredients. The American Academy of Dermatology and the FDA have both approved the ingredient, whereas Sweden has banned the ingredient entirely. There are some very conflicting thoughts and studies on this ingredient in particular. Beyond just personal safety,  oxybenzone is known as one of the causes of coral bleaching. Needless to say, this product won’t be on my list to try unless they change the formula to include an SPF like non-nano zinc or titanium dioxide. My personal take on this is that there are better ingredients that can be used as an SPF than oxybenzone, regardless of what governing agents deem to be ‘safe’. Being cruelty free and vegan doesn’t automatically make a product safe for the environment. Food for thought.

Back to the mascara…

Would I buy this mascara again? Yes. Is it all natural? No.

Wholly Beautiful contains affiliate links. These help me bring you the best content each week! I will specify if product is gifted.